State-of-the-art virtual reality now lets users see and explore every direction in a photo or video, up, down, right & left. With six degrees of freedom or 6DOF – you can now move in the three dimensional space. The body is free to change position as forward/backward (surge), up/down (heave), left/right (sway), translation in three perpendicular axes, combined with changes in orientation through rotation about three perpendicular axes, often termed yaw (normal axis), pitch (transverse axis), and roll (longitudinal axis), you can now also look behind people and objects, but also forwards and backwards – the VR experience becomes truly immersive.

The creation of this virtual world depends on advanced tools and techniques to achieve the high quality expected by end users. This white paper explains how the ArtofCorner studio, with the support of Arforia1, has applied its expertise in photogrammetry and VR creation to produce a Laval Virtual 2018 award winning 6DOF virtual reality application.

From photo capture and 3D model creation using Capturing Reality software, to the development of an interactive application using Unity and distribution of the app to users via SteamVR*, ArtofCorner has built an end-to-end workflow that gives exceptional and enchanting VR results.

The power of the system based on an Intel 18-core processor (Intel® Core™ i9 X-series) made it possible to accomplish the entire project within one week.

The Basics of Making an Immersive VR Experience

At the core of the whole project is photogrammetry. Essentially the science of making measurements from photographs, photogrammetry enables the transposition of static photos and images into a 3D virtual reality in which users can see objects from different angles with their natural depth, texture, and lighting.

Trade-offs between certain parameters may be necessary. In short, depending on the time you have and the performance of your computer (desktop, notebook or workstation), you may decide to increase or decrease the parameters mentioned above. For example, deciding to shoot 20,000 photos at 4K resolution will increase the overall quality and more time and effort will be required to both shoot and compute.

ArtofCorner’s choices were determined by the studio’s overall objective of creating a highly attractive VR experience with a suitably high level of visual quality within a compact creation timeframe. Given this criteria , the input to the VR application creation process was fixed at 3,000 photos at FHD quality. An Intel® Core™ i9 X-series hardware platform was chosen to run Adobe* Lightroom, DxO Photolab*, RealityCapture*, and Unity* software applications.

The power of the system based on an Intel 18-core processor made it possible to accomplish the entire project within one week. Processing of the 3,000 photos was also extremely fast, taking just a few hours.

Step Inside an Extraordinary Virtual World

The VR application created by ArtofCorner recreates the studio of the artist Antoine Bourdelle. His studio, Musée Bourdelle, is one of the 14 City of Paris museums managed by Paris Musées*, and has been reconstructed as it was over a century ago. This allows users of the app to explore Bourdelle’s workshop in ways that would be impossible in the real world.

As Frédéric Purgal, CEO of ArtofCorner, says, “When you put on the VR headset, you dive into the world of Bourdelle”. The experience starts one winter evening in 1885, as the artist arrives in an almost empty workshop in the heart of Paris, with a head full of dreams and projects. Accompanied by the sounds of the artist at work, sculpting, creating, with background voices and music, users see the workshop come to life and fill with the sublime works of art preserved in the real world studio today.

For Frédéric Purgal, the starting point for a great VR experience is clear: “Identify a place of interest to the public and with its own value as a place of creation with artwork, paintings or sculptures for example. A place that has a story to tell.” The starting point is to bring together a multidisciplinary technical team with skills in different fields, including writing, photo capture, computer graphics, development (game design, gameplay) and sound engineering. There are then seven main steps to be accomplished for a VR application like ‘Bourdelle’.

Everything must be photographed with meticulous attention paid to light setting, shadows, and exposure. The work is done over one or two full days in a room in which nothing can be moved. Completely systematic photo capture is essential to ensure coverage of the entire volume of the room. 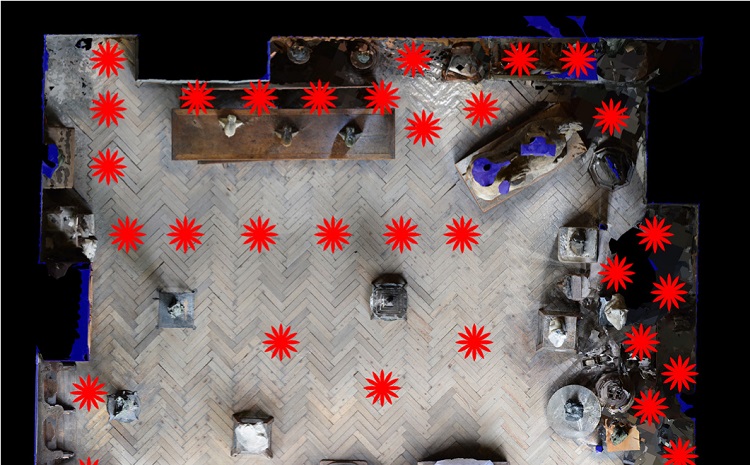 After selection of the right photos, the team uses software like Lightroom or DxO Photolab* to enhance the images. Working with raw image files offers the best possibilities of image quality, although this also requires increased processing power. A system based on Intel Core i9 X-series processor can accelerate the process considerably. 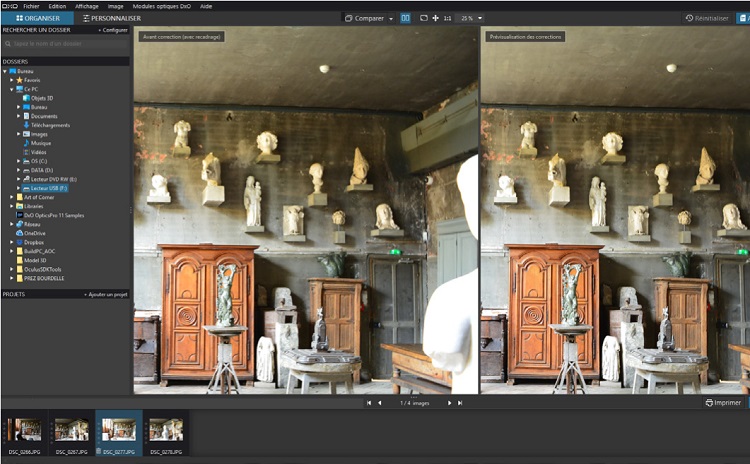 ArtofCorner uses the RealityCapture application from Capturing Reality for creating the raw 3D model. The application offers numerous settings and capabilities, and above all gives ArtofCorner* the results it wants. 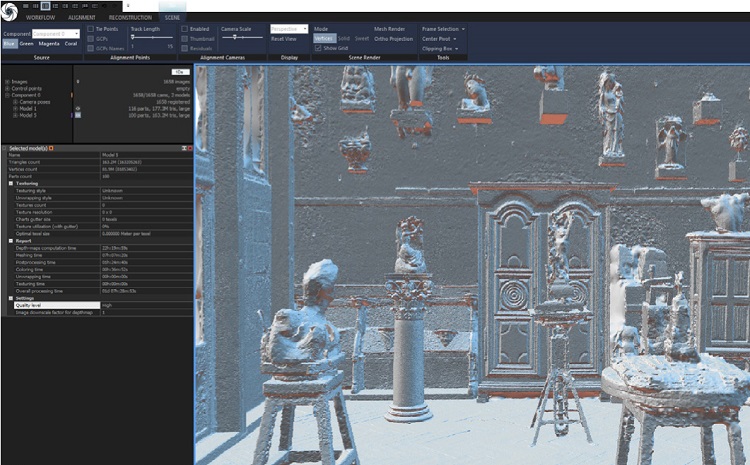 Working from the raw 3D model from the previous step, ArtofCorner graphic designers refine the images. Textures and volumes are manually corrected when needed. 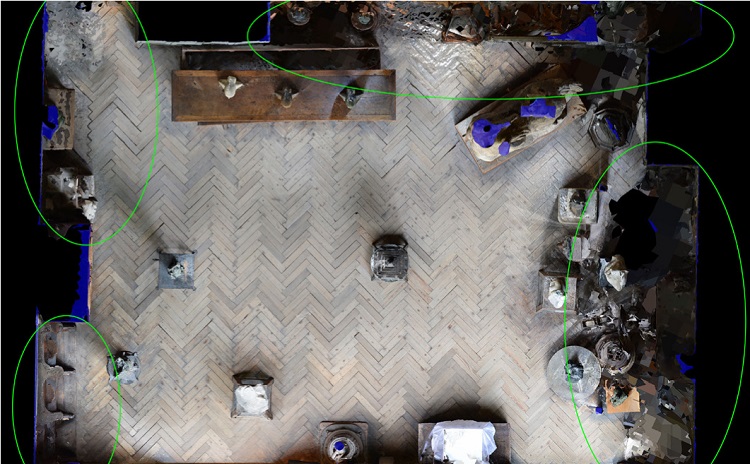 The graphic designers then transfer the refined 3D model of the room to the Unity application (using Unreal Engine* is another option) for game design with scripting.

Also known as the decimation or mesh processing phase, the team works here on the size and weight of the cleaned 3D model to ensure smooth integration and handling in Unity.

Working to the pre-defined scenario, the team uses Unity to create the interactions, designing the sound and importing objects as necessary.

The photogrammetry and the multiple interactions including virtual manipulation of objects created an ultra-realistic VR environment. The pilot version of the Bourdelle project received the 2018 Award for the Best Interactive VR Content at the annual ‘Laval Virtual’ event, one of the most prestigious events in Europe for the world of virtual reality and augmented reality.

The Bourdelle application is now available for popular virtual reality headsets HTC Vive* and Oculus Rift*. A version is under construction for Samsung Gear VR*.

Making the Most of the Market Opportunity

The VR website Entertainment report has stated that “Estimates on the potential of the VR market have been highly ambitious, with varying projections of 50%-100% annual growth rates, resulting in a market that ranges in size from $19 billion to $35 billion”. A booming market can benefit many players. To be successful however, enterprises will need marketing vision and cutting-edge technology, while maintaining a focus on profitability.

To ensure the best ROI for its Bourdelle VR app, ArtofCorner* made calculated decisions about photo capture and quality, the choice of software applications such as Adobe Lightroom, DxO Photolab, RealityCapture, Unity, and Unreal Engine, and the use of Intel® Core i9 X series processors.

The results have been excellent all round. After receiving the 2018 Laval Virtual Award, ArtofCorner also received the Mediakwest Award during the 360 FILM Festival for the "Bourdelle" application.

Find Out More About the Future of VR with Videogrammetry

Videogrammetry is to photogrammetry as videos are to photos and needs even higher levels of processing power than photogrammetry. Find out more about the future of virtual reality with videogrammetry Intel® Studios: A Home for Volumetric Video Capture and Creation. 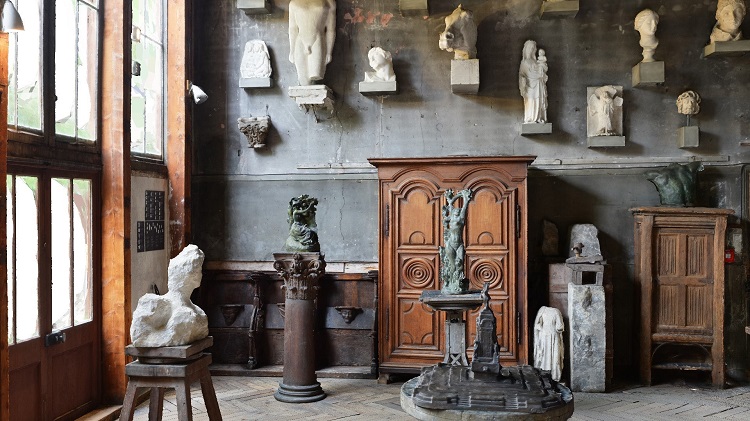